Plastic is becoming one of the greatest threats to marine life, birds and even humans. Plastic does not break down easily; it can take a single use soda bottle 450 years to break down in a landfill. Only 9% of plastic is recycled leading to the equivalent of one truck load of plastic being dumped into the oceans every minute.

Indeed, A new report from the Organisation for Economic Co-operation and Development warns the amount of plastic waste worldwide is likely to nearly triple over the next four decades if "radical action" is not taken to curb the level of pollution!

MGC member, Karen Hennigan, has led our Club's recycling efforts. As she relates, "In 2020 the pandemic sent our son home from URI where he was studying for his Master's in Oceanography. In the evenings he would talk about the research he was involved in dealing with microplastics in the oceans. I started reading about microplastics on my own and have learned it is everywhere - including human breastmilk. Only 6% of plastic is recycled. I wanted to do something where I knew it was going to make a difference and not just greenwashing. I stumbled on to Trex Decking Material, which recycles plastic film into decking and outdoor furniture, when I was building a new deck and looking for a low maintenance product with no splinters. I learned they have a recycling program for both communities and for commercial use. The fact that they pay for used plastic film convinced me that they were the real deal and going to actually recycle the plastic. Signing up to join was easy. But I thought we could do better than just collecting from members of the garden club. We contacted local businesses who have joined us. It took us 4.5 months to gather out first 500 pounds of plastic. Once a community group donates 500 pounds they receive a bench produced by Trex. Our plan is to donate the bench to the local Historical Society. A month into our second round we are already at the 200 pound mark for collecting and I have worked with other groups to help them start their own programs."

Karen's team collects clean, dry, plastic film from club members and local businesses and turns it in at Hannaford Supermarket in Keene.

What have we recycled in this program? 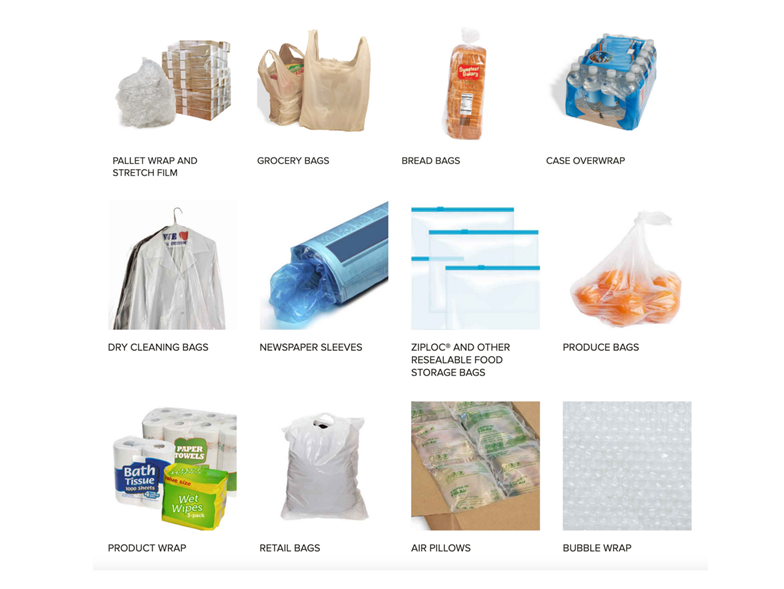